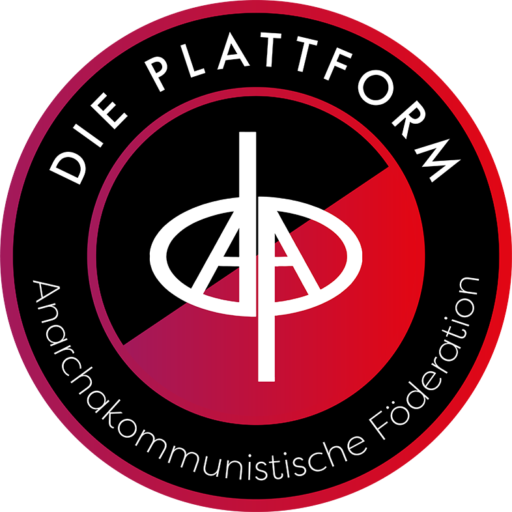 We are “die plattform”, an anarcha-communist federation from and for the German-speaking region. Our aim is to overcome all forms of oppression and to build a society without domination, class or state on the basis of anarchist communism.

In order to advance the struggle for this society, we have come together at the beginning of 2019 under the name “die plattform”. As of now we have local groups in several cities as well as a supra-regional group which unites all members of our organisation who are not yet able to form a local group in their own city or region.

As anarcha-communists, we are convinced that the key to long-term social change towards our vision of a liberated society lies in the social movements of the wage-dependent class.

In these social movements from below, people come together who are fighting for concrete improvements of their living conditions; who stand up against high rents and gentrification, who organise themselves against patriarchy and the never-ending femicides, who rise up against the capitalist destruction of our climate and planet and who resolutely oppose the everyday racism of the state and inside the rest of society.

We want to get involved in the social movements of our time as a well-organised anarchist power and in them, side by side with the people of our class, we want to push forward the struggle for our common interests.

(Playlist of videos with English Subtitles)

The social revolution is not only still possible. It is necessary – but it will not come out of nowhere. From the daily imposition that is wage labour, the increasing displacement caused by high rents, the thousands of dead refugees in the Mediterranean, society’s shift to the right, the climate crisis which is getting worse every day and the constant, brutal class struggle from above, there are many reasons to work hard for it. Precisely because this will not be easy: Let’s do it together!

To be able to work effectively as a federation, we consider it essential to work out a common analysis of the existing social conditions, a shared political basis and a common strategic understanding. We have laid a foundation for this with our first text, which we published at the beginning of 2019 (→ Link).

We are fed up with continuing to wage mere defensive struggles in order to preserve the last remnants of freedom and self-determination that the state and capitalism have left us.

We want the future to be about fighting for liberty for all. Just as in the days when anarchism was still a mass movement.
We want a realistic, revolutionary perspective against the existing misery.

If you are curious, we have created a small FAQ (→ Link) with frequently asked questions about our initiative and our attempts to answer them.

If you would like to join us on this path, then write to us! (→ kontakt@dieplattform.org) or contact our local structures directly.

If you are not from a German-speaking country, but still interested in our organisation or would like to work with us, please contact our e-mail address for international communication (→ international@dieplattform.org)